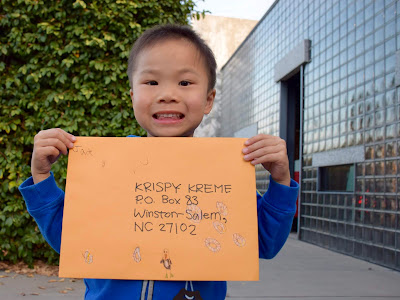 So my 5-year-old son wanted Krispy Kreme to donate their misshapen doughnuts. Eight days after sending the company a letter, he saw a package laying at our front door, with his name and a Krispy Kreme logo on the envelop.

This is the first time he got a package or a letter that addresses him as a “mister.” He was totally excited! Immediately, he opened the package.

This is what he got: 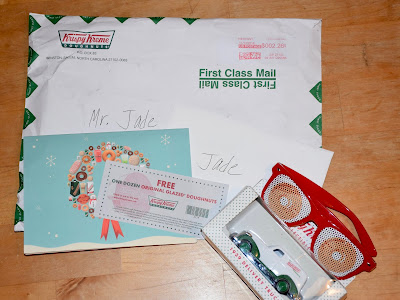 A Christmas card, a coupon good for one dozen original glazed doughnuts, a pair of toy sunglasses, and a 1939 delivery truck model.

There wasn’t a word about what the company would do with their irregular doughnuts besides throwing them away. Even so, I thought my son would be delighted. After all, he is a 5-year-old who LOVES toy trucks!

But he wasn’t. He didn’t pay much attention to that truck. He tried to read that card. It said “May the joy of the holidays be with you throughout the year.” Some of the words were hard for him, so I helped. He read it several times.

And then, after a moment of silence, he looked up at me, “so they don’t say what they are gonna do with the not-so-beautiful doughnuts!”

“No, they didn’t.” I understood a national chain like Krispy Kreme must have a lot to consider when making a decision like this, but I didn’t know how to explain it to my young child.

“Maybe they don’t take me seriously because I am a child?” He was apparently disappointed.

“No, I don’t think that’s the case, baby. Maybe it’s hard for them to donate the doughnuts.”

The next morning was Saturday. We visited one of our local doughnut shops and asked the manager how they deal with the “ugly” doughnuts. They told us they would still serve them since doughnuts with imperfect size the shape taste just as good. They also told us many restaurants don’t donate leftover food because they’re scared of being sued.

My son was dismayed. “I don’t believe it!”

I was surprised, too. So I did a little research with my son. (Sometimes it’s really convenient to be a journalist.) It turned out there is no available public record of anyone in the United States being sued because of harms to donated food. Restaurants and companies are protected by Bill Emerson Good Samaritan Food Donation Act. Passed in 1996, the bill protects restaurants from civil and criminal licitly should a recipient get ill or hurt as a result of consumed donated food.

As soon as we are home, my son started to write another letter to his “new friends at Krispy Kreme,”sharing what he just learned and offering to help. In the middle of writing the letter, he stopped and ask, “do you think it will work better if you write them a letter? Because you’re an adult? And a journalist?”

“Maybe,” I said. “But I think you should finish what you started.”

He said, “you are right!” And finished this letter. 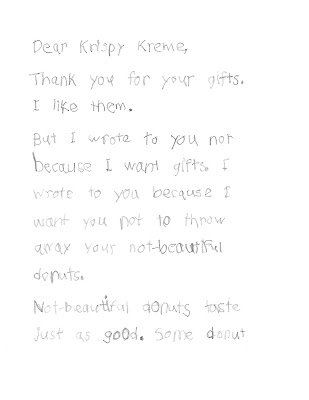 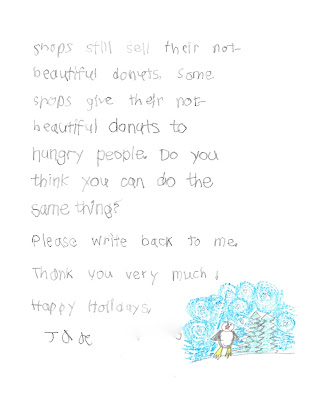