The woman breastfed on a refugee boat 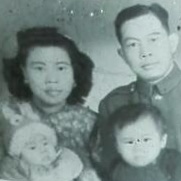 I have a breastfeeding story.

It was 1949, in the middle of Chinese civil war. A mother trying to escape from the war-torn China got on a refugee boat in Guangzhou with her 3-year-old and 1-year-old.

The boat was sailing to Kaohsiung. Soon after they left the port, the two children started to cry. People on the boat were afraid that the kids crying would attract the communist navy searching for refugees, and were going to throw the kids into the sea.

The mother fought against those people with all her strength, promising that she would stop the children crying. She took off her blouse, put the two kids under her arms, one on each side, and then put her nipples into the kids' months. Comforted by the mother's breasts, the children calmed down. The mother kept nursing her children until they arrived Kaohsiung safely two days later.

The mother in the story is my grandmother. Those two children are my father and my uncle.

I heard the story from my grandmother when I was a little girl. It's been such a long time that I almost forgot about it.

Then I had my son. Two hours later after the delivery, he cried for food for the first time. The nurse showed me how to latch the baby. Soon as I brought him onto my breast, he opened his mouth widely and latched on. It was amazing. We never really had a latching problem. However, a real problem happened six months later, when he started to teething. He wanted to nurse constantly because the nursing is soothing to him. Sometimes he bit me. It hurt so badly that I often burst into tears.

Funny enough, I thought about my grandma's breastfeeding story every time my baby bit me. I was too young to understand what breastfeeding's really like when I first heard about the story. Now I knew. But, still, my grandma was constantly breastfed two toddlers (with teeth!) for 48 hours on a refugee boat. What's that really like? I could still hardly to imagine.

All in a sudden I just wanted to call my grandma, tell her how great she was, and ask her to tell me the story in detail again. But I couldn't. She passed away three years ago. I could only search for the brave woman who breastfed on a refugee boat in my memory.