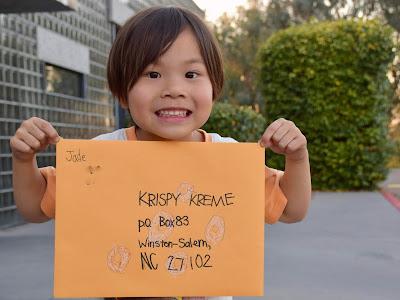 I don’t like to admit this, but in spite of all my efforts to protect kids from junk food, my 5-year-old son loves doughnuts. (So does my husband. I can’t blame him. He went to school in North Carolina and Krispy Kreme plays a major part in his collegehood memory.)

So once a while I would take my son to a Krispy Kreme place for a parent-child date. This Tuesday we visited the Krispy Kreme location in San Diego’s Carmel Mountain neighborhood. It was our lucky day: The “Hot Now” sign was lit up when we arrived and we got free doughnuts. My son was very happy. Really, you can’t buy happiness but you can buy doughnuts. And for a 5-year-old, they are pretty much the same thing.

Regardless the happiness he felt with the free doughnuts, my son left the Krispy Kreme location feeling exactly the opposite on that day.

As always, he enjoyed his doughnut while watching the doughnut machine running and pumping out his favorite doughnuts. For some reason, he saw something he never noticed before. A woman by the conveyor belt took some doughnuts, crumpled them up, and left them on the counter top.

My son was alerted, “What are they doing to those doughnuts?”

I looked at the conveyor belt and realized those were irregular doughnuts. Some of them looked like two doughnuts squashed together. Some of them were just shaped weird. I explained to him that it’s probably the company’s quality control procedure. We stood there and watched for a few more minutes. Five not-so-perfect doughnuts were taken within five minutes.

My son wanted to know what would happen to those little weirdos. So we reached out to Krispy Kreme. Our Krispy Kreme host Stephen told us the company policy is to compost any doughnuts that don’t arraign the “Krispy Kreme standard”.

But it wasn't over yet. The seem-to-be minor incident really bothered my seem-to-be innocent, ignorant child. On our way home he asked, “Do you think they can not throw the doughnuts away? Do you think they can give the doughnuts to hungry people? There are lots of hungry people. Every time you count one to five, somebody dies because he is too hungry.” He closed his eyes and count to five. Then he announced: “Somebody just died. He didn’t have to die if we had given him the doughnuts!”

He actually remembered that every 5 seconds a child dies of hunger or related causes. We read it together somewhere a while ago. That surprised me. I told him I think donating doughnuts is doable. I used to volunteer with a church’s hunger ministry and I remember getting misshapen doughnuts from local doughnut shops.

My son asked me to drive back so that he could talk to the “boss” at Krispy Kreme. I told him it might not work because the “boss” actually lives in North Carolina. He then asked to write to him. So that evening he wrote this letter. 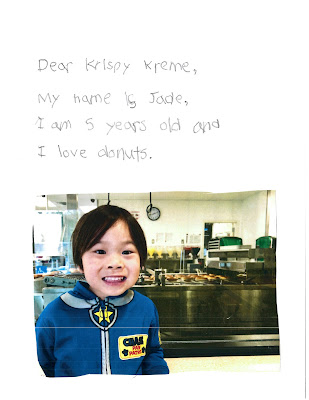 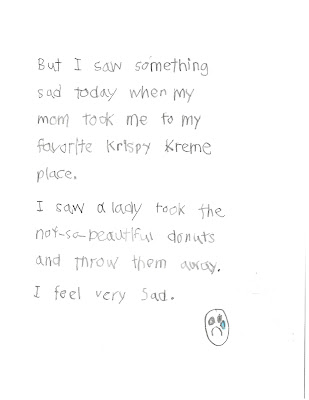 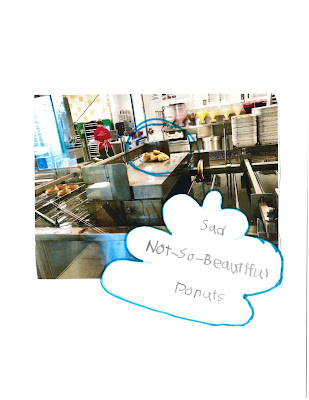 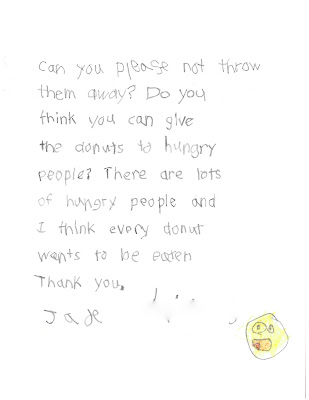