The Case of Relactation 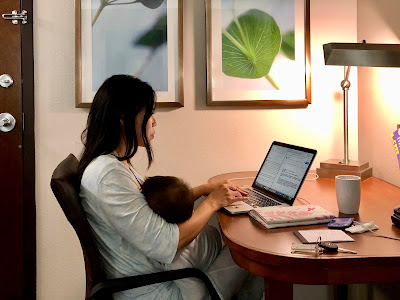 Baby Jasper weaned himself at 18 months old, weeks after I had a surgery to remove a benign tumor in my left breast. That was unexpected. I planned to breast him for at least two years, like I did for his big brother. But it hurt badly to breastfeed in the first days after the surgery and my milk supply went down dramatically. He probably sensed how uncomfortable I was and discouraged by my empty breasts, thus ended the breastfeeding relationship early. That saddened me.

Just like he weaned without warning, he relactated himself unexpectedly. It all happened in the past one month.

Jasper is now two years old and haven’t been breastfeeding for almost half a year. Last month he went on a 3-week-long business trip to Asia with me. For some reason—maybe the 14-hour-long flight, or the time difference, or the culture shock—he seemed to some comfort in addition to the e-devices and new toys I packed him. He wouldn’t sit by himself on the airplane. He asked for milk the first night when we were in Taipei. I gave him a straw cup with cow milk inside. He refused; cuddled up to me and tried to suck my breast. He finally latched on, for the first time in six months.

After that, he often sought breast for comfort when he was going to sleep and just waking up. That happened often because he woke up often due to jet lag. I let him suck, even though I didn’t have milk. But, I thought, breastfeeding is not just about the milk. My baby needed the comfort and bonding when we were away from home.

And then, to my surprise, my body started to make milk again in the second week! I can feel my breast tissue fills with milk around bedtime. By the third week, my boob would leak when Jasper was sucking the other boob. That was fabulous. I never thought my body can make milk again, after the breast surgery and half a year after stop breastfeeding.