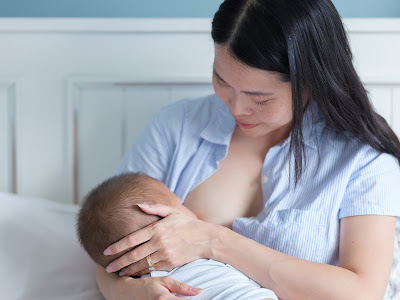 Recently I had a privilege to work with Heidi Burke-Pevney, a friend of mine and the San Diego County Breastfeeding Coalition’s IBCLC of 2018.

It all happened in late April, when a Chinese-speaking mother struggling with breastfeeding and trying to seek professional help. First, she asked her friend to recommend Chinese-speaking lactation consultants (Her friend live in San Francisco and used a Chinese-speaking lactation consultant). When they couldn’t locate one in San Diego, they turned to Heidi for help. In spite of her professionalism, Heidi doesn’t speak Chinese. Then the mother started to text Heidi, with her friend translated in between. It was confusing and if I remember it right, it took them days to figure out a home-visit appointment.

It was where I jumped in. I went to the first appointment with Heidi as an interpreter. It was a nice house full of cutting-edge baby tech, from smart socks to smart smart bassinet. We met the couple and the 1-week-old baby.

“Science says that breastfeeding is the best for babies,” said the dad, firmly. “I believe in science. We must give our baby breast milk.”

“I read about that breastfed babies have better immune systems,” said the mom. “I barely slept last night. I’m so tired. But I still want to make this work.” I saw a Chinese breastfeeding book on her night stand.

So we got to work. Heidi started to undress the baby, weigh the baby, demonstrate skin-to-skin. I translated everything that Heidi and the mom said. When Heidi trying to find out the most comfortable nursing position for the mom, the family’s nanny stood by and stared with her arms crossed.

“I’ve seen this before,” she murmured unapprovingly. “It’s no use. Bottle doesn’t hurt anybody.” She has been supplementing the baby with formula.

I was sure the mom heard the nanny, but she seemed to decide to ignore it. I asked the grandma who was also there, “what do you feel about breastfeeding?”

“I…I don’t know,” said the grandma, “I never breastfed. But my daughter wants to breastfeed. I want to support her.”

Here I saw a typical Chinese-American family: young, educated mother wants to breastfeed, while grandma and nanny of the earlier generation don’t know much about breastfeeding or even against breastfeeding. This new mom was actually lucky to have supportive mother and husband.

I am a health journalist and have been covering maternal and children health for almost my entire career life. Too often I heard people say “but Asian moms don’t breastfeed.” One resource revealed to me that some hospitals in great Los Angeles area refused to go baby friendly because they mainly serve Asian community and believe that because Asian moms don’t want to breastfeed, it would decrease their customer satisfaction if they seek baby friendly certification.

This is unfortunate. It’s not Asian mothers don’t breastfeed; it’s Asian mothers are under-served. Southern California is the home to the largest Asian population outside of Asia, yet fewer than 4% of the lactation consultants in this area speak an Asian language. When I returned to work as a staff writer at a Chinese-language newspaper serving Los Angeles six years ago, my employer refused to provide breastfeeding accommodation. I tried to invite a lactation professional to my company and talk to my supervisor about the importance of breastfeeding, but couldn’t find even one Chinese-speaking lactation professional in the entire great Los Angeles area.

And this young mom that Heidi and I recently work with was a great example. She had every intention to breastfeed, but without proper support and professional assistance, she might as well just gave up.

One month later after our first visit, the mom reported that she was able to stop formula supplements and breastfeed the baby exclusively. We paid her a follow-up visit where she told us she wants to become a lactation consultant. We were greatly encouraged. Let’s hope for more positive changes like this.