The Voice of Breastfeeding Community Needs to be Heard 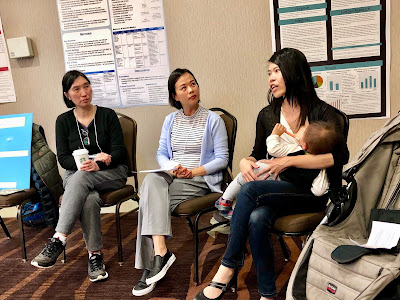 With my colleagues at Asian Breastfeeding Task Force, I had a chance to present at the 14th Breastfeeding and Feminism International Conference in Chapel Hill, North Carolina a while ago. At the conference, we presented on a panel entitled “Normalizing breastfeeding in Asian communities.” The focus of our presentation was on sharing the history and process of the community driven formation of the Task Force along with current and future goals and activities of the group.

My biggest gain from the conference, however, was to meet many legendary activists. Leah Margulies, for one.

Leah is a feminist, anti-corporate activist, founding member of the New Heaven Women’s Liberation Rock Band and Movement, lawyer, and single mother. In 1977, she helped to launch the famous Nestle boycott.

At that time, infant formula companies were aggressively marketing powdered formulas in the Third World countries to mothers who couldn’t possibly use it safely since they didn’t have access to clean water, refrigeration and sterilizing equipment. It resulted in infant malnutrition and death. Nestle was the biggest offender. Leah recruited a few other believers, started INFACT, and then launched the Nestle Boycott. The boycott led to the UN adopting a code of marketing, now known as International Code of Marketing of Breast Milk Substitutes to attempt to control this industry. The boycott in the US ended in 1984, but it continued to this day in many parts of the world.

The Nestle boycott happened even before I was born, but I have a special feeling toward the case. I am a journalist covering maternal and infant health for a variety of publications. Years ago I helped to translate the Nestle Boycott report into Mandarin Chinese, and cited the report in several of my articles. Later one of the editors I worked with implied me to stop writing about the boycott, because the publisher’s mother company reached some kind of commercial agreement with the infant formula company.

I was shocked. In spite of all the codes, infant formula industry still has every way to manipulate the media and interfere the public opinion. I became a reporter to be the voice of the voiceless, but I am silenced on key issues like this. Most people would imagine that as journalists, we could write whatever we want to write, but the truth is, our hands are tied.

Since the Nestle boycott, the marketing strategy of the infant formula industry has changed: They no longer advertise that “formula is good.” Instead, they tell mothers “breast is good but difficult. So just give up. Let us help you with infant formula.” They have developed a faux-sense that society is ganging up on them; judging non-breastfeeding community for choosing alternative methods of feeding their babies.