What I Learned from a Biopsy while Breastfeeding 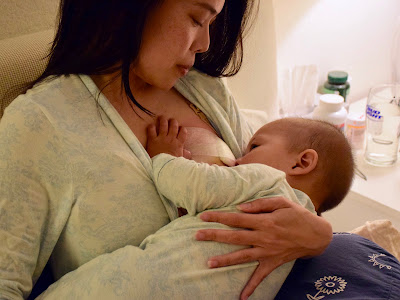 Last month, I discovered a suspicious lump in my left breast through a breast self-exam. After ultrasound my doctor decided that the lump must be biopsied for assessment.

In the evening before the biopsy, looking at my left breast in the mirror, I realized that I don’t worry about cancer—I have a strong family history of breast cancer; I’ve been seeing and hearing close ones being diagnosed with breast cancer ever since I was a little girl; I am well prepared psychologically. I realized that, however, I worry about my future ability of breastfeeding.

It’s hard to find breastfeeding-friendly information on this topic, so I turned to several of my trusted IBCLC friends for their opinion. Most of them didn’t see any reason I cannot breastfeed after a biopsy unless the test results found otherwise. I was relieved.

This was what I learned: needle biopsies, including fine needle aspiration and core biopsy can be done on a breastfeeding mother. The smallest needle that will get the diagnosis should be used, and the risk of milk fistula, which is chronic milk leakage, is very rare.

The evening after the biopsy—or eight hours after the biopsy, to be precisely—I was holding Jasper, breastfeeding as usual. I felt grateful. It still felt sore in my left breast and Jasper was curious about the surgical glue over my incision. He tried to peel it off so I had to put another bandage on top of it. Other then that the biopsy barely caused me any problem in breastfeeding. I felt so grateful.

As this article being written, I was still waiting for the results for the biopsy and not sure how much longer I’ll be able to breastfeed. For now, I just wanted to cherish the time with my baby while I still can. Meanwhile, I realized that breastfeeding is such a gift—both for mom and for the baby. It is a shame that there are still mothers who are completely healthy with breasts fully capable for breastfeeding being drove to infant formula due to breastfeeding-unfriendly environments. Mothers have the right to breastfeed their babies and deserve fully support.

I also realized how hard the feeling can be for a mother who may not be able to breastfeed due to disease. All in a sudden I was even more proud of myself being a breastmilk donor (before the lump was discovered) at the Mother’s Milk Bank. It is my sincere wish that one day all the mothers will be able to breastfeed as long as they want with the fully support from the society as a whole. And all the babies will be able to receive donor’s milk when the mother’s milk is not available.