The Birth of a Little Food Waste Warrior 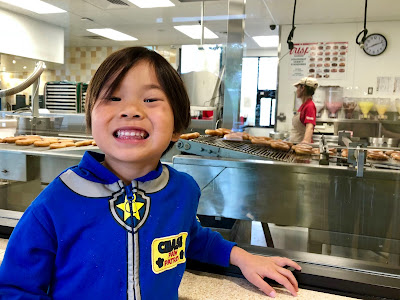 So my 5-year-old son wrote Krispy Kreme a letter, urging them to donate their “ugly” doughnuts. The company responded his letter with toys and coupons, but not one word about if his suggestion will be considered.

Like all the other 5-year-old, my son likes toys. But what he wanted more is a a real response. So he wrote another letter.

This is how Krispy Kreme responded to his second letter: 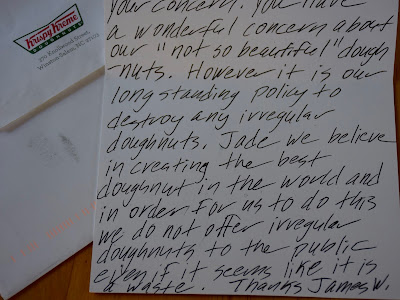 So the company basically said that in order to maintain a reputation of serving the best doughnuts, they have to throw away the irregular doughnuts. This didn’t make sense to me. Or my son.

“…I don’t know.” I really don’t. The last time we visited Krispy Kreme, we saw them throw away 5 doughnuts in 10 minutes. I know little about the food industry, but that looked like a high percentage of doughnuts they made didn't arraign their own standard. In stead of throwing tons of edible food away, why not improve their technique? I don’t know.

“I…I…” my son hesitantly started, seeming to have some difficulties in opening his mouth. Then he finally said it, “I won’t ever eat Krispy Kreme again!”

It must be a hard decision for him, considering how much he loved doughnuts.

“I…I…I think the more we eat Krispy Kreme, the more they will throw away the poor doughnuts. I just don’t feel good about it.” He continued, “And I want every one to stop throwing food away.”

I told him that I’ll be the first one to join him and stop wasting food. And then I asked if there is anything else I can do to support his cause.

So my son had his very first attempt to advocate for his own believing. This is how he concluded the experience: