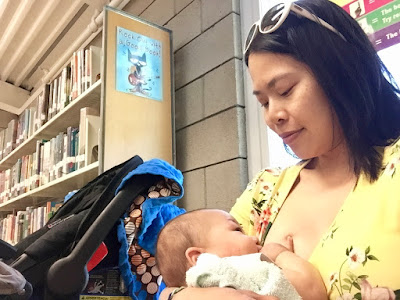 Dia Michels, the author of Milk, Money & Madness: The Culture and Politics of Breastfeeding believes that breastfeeding, talking, and touch in infancy all support school success.

“In the wild, the day the child weans is the day s/he walks. Childhood and lactation are one-and-the-same,” she wrote. “Everything the young need to know to travel the path from helplessness to self-sufficiency is learned while breastfeeding. By looking at mammal mothering, we learn about the role breastmilk plays in child development and gain an appreciation of early mother-infant attachment.”

Breastfeeding plays a unique role in promoting literacy. A research conducted by Oxford University and the Institute for Social and Economic Research, Essex University, have shown that breastfeeding causes children to do better at school. The study found that as little as four weeks of breastfeeding for a newborn baby has a significant effect on brain development, which persists until the child is at least 14 years old.

Researchers matched each breastfed baby with one or more babies who were not breastfed, but who were similar in all other respects. Test scores in reading, writing and mathematics for the children at ages five, seven, 11 and 14 revealed a statistically significant difference between those who had been breastfed as compared with those who had not.

Some argues that breastfeeding is more likely to be practiced by mothers who are of higher social class. To demonstrate whether the relationship between breastfeeding and brain development was caused by the breastfeeding alone, or whether it was because mothers who breastfeed are likely to have more successful children anyway, the researcher used a rich dataset from the Avon Longitudinal Study of Parents and Children, which covers 12,000 children born in the early 1990s in the Bristol area. Babies were matched on a huge range of characteristics, including gender, gestational age, birth weight, mother’s age and marital status, parents’ job status and education, and home environment.

Crucially, the researchers also used the parents’ attitudes to breastfeeding as measured before birth.

“Comparing the test scores of groups of children matched in this way, we are effectively estimating the causal effect of breastfeeding,” said co-author of the research, Dr. Almudena Sevilla-Sanz of the Department of Economics and the Centre for Time Use Research at Oxford University. “We find that breastfeeding does have a causal effect on children’s cognitive outcomes. The difference is statistically significant across English, Maths and Science scores, and persists into secondary school. Indeed, there is some evidence that the effect tends to grow over time.”

The researchers found that even a combination of breastfeeding and formula produced better development than formula alone.