A Quick Guide to Successful Breastfeeding 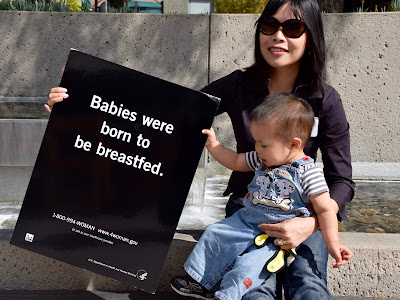 There’s a big global push in from experts to have mothers of newborns breastfeed exclusively for at least six months. And many new moms want to. But only about 60 percent who start off breastfeeding keep it up for six moths or more, according to the Centers for Disease Control and Prevention.

Here’s a quick guide to advice from lactation consultants, pediatricians and researchers who had tips for women on how to reach their breastfeeding goals.

Expect problems at first
Breastfeeding is natural, but that doesn’t mean it is automatic and easy, as many people think of.

People often think moms and babies will know exactly what to do, and they won’t even have to think about it. Some times that happens, but it’s not the most common outcome.

Even in traditional societies that don’t use formula or bottles, women often struggle to breastfeed, it turns out.

Take Himba mothers in the desert of northern Namibia for example. As NPR reported, essentially all Himba moms breastfeed their babies. But about two-thirds of these women have problems at the beginning, researchers found.

Line up a lactation coach before the baby comes
Since problems are likely, moms need to be ready.

Arrange to have somebody who’s experienced with breastfeeding present at baby’s birth or right after the birth to coach the new mom is suggested.

The coach can be a friend, a relative or a professional lactation consultant.

Many moms are looking on the Internet and on the YouTube about how babies should latch and what to do. That can be helpful, too, but moms still need hands-on guidance.

Create a support network for breastfeeding
Mothers still feel really isolated and confused about what they’re supposed to do after birth, reported BBC.

But being isolated with a newborn is the opposite of how humans evolved. Throughout evolutionary history, humans have relied so much on others to share the load of caring for babies. It’s one of things that make us human.

Traditionally, new moms all over the world have been taught how to breastfeed. They had their moms or aunts or close friends there to help.

Every new mother needs a support network for breastfeeding. It takes a whole village.

Don’t sweat a little supplementation with formula
New mothers often hear a lot from family, friends and experts about the importance about exclusively breastfeeding. That’s what the American Academy of Pediatrics recommends for the first six months.

Decades of scientific research proves the formula is nutritionally inferior to breastmilk. But, when a mother’s own breastmilk or human donor milk is not available, infant formula is an important third option that can, at times, save lives. Also, supplement option can be a tool that helps moms work to establish their breastmilk supply.

The bottom line is, supplementing with formula is no way means mom’s failed.