Infant formula: what's in that?

A mother facebook messaged me and asked how is baby formula made. It's a tough question to answer with an FB message. I decided to write this blog post about infant formula.

The human species has been breastfeeding for nearly half a million years. It’s only in the last 60 years that we have begun to give babies the highly processed convenience food called “formula.” US formula manufactures spend around 8 million dollars per year marketing infant formula, while La Leche League International (LLLI), the best-known breastfeeding advocacy group, has a 3.5 million annual budget.

No wonder modern mothers are encouraged to embrace the bottle-feeding culture. But what’s really in baby formula?

In US commercial infant formulas are regulated by the Food and Drug Administration (FDA). Three major types are available.

In addition, specialized formulas are available for premature infants and babies who have specific medical conditions.

Baby formula was never intended to be consumed on the widespread basis that it is today. It was conceived in the late 1800s as a means of providing necessary sustenance for foundlings and orphans who would otherwise have starved. In this narrow context, where no other food was available, formula could be a lifesaver.

However, as time went on and the subject of human nutrition in general became more “scientific,” manufactured breast milk substitutes were promoted to the general public as a technological improvement to breast milk.

Mary Smale, a lactation consultant from UK’s National Childbirth Trust told Ecologist Magazine, “If anybody were to ask ‘which formula should I use?’ or ‘which is nearest to mother’s milk?’ The answer would be ‘nobody knows.’ Because there is not one single objective source of that kind of information provided by anybody.”

“Only the manufacturers know what’s in their stuff, and they aren’t telling. They may advertise special ‘healthy’ ingredients like oligosaccharides, long-chain fatty acids, or, a while ago, beta-carotene, but they never actually tell you what the basic product is made form or where the ingredients come from,” said Smale.

That said, the known constituents of breast milk were, and are, used as a general reference for scientists devising infant formulas. But, to this day, there is no actual “formula” for formula. In fact, the process of producing infant formulas has, since its earliest days, been a trial and error process.

Modern parents might consider giving their babies formula for many reasons. But keep in mind that formula does come with consequences, and every mother needs to be aware of those so she can make truly informed decision on whether to use it or not.

A little history about infant formula: In 1974, Nestle was accused of getting third world mothers hooked on formula, which is less healthy and more expensive than breast milk. The allegations led to hearings in the Senate and the World Health Organization(WHO), resulting in a new set of marketing rules. Below is the cover of a booklet that blew the lid off the baby formula industry, publish by British human rights organization War on Want. 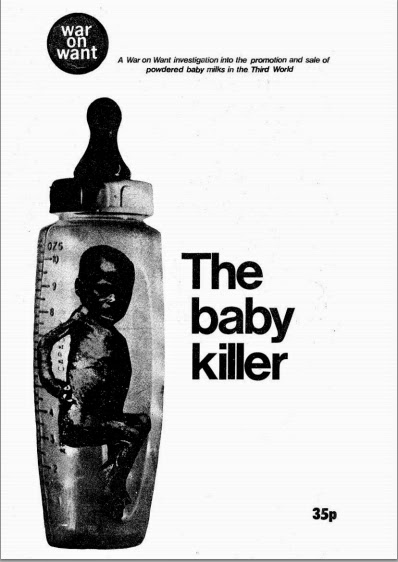