Not just one mother's battle

Eaton was an Iowa City Firefighter. Thirty-five years ago, she continued to breastfeed her child at work against orders from her supervisor, and a breastfeeding discussion was launched locally and gained national attention.

Today, breastfeeding in America is treated a little differently, but it is also very different than other cultures. The program told Eaton’s story, and also discussed what businesses are required to provide for nursing employees, the challenges of refugee and immigrant women who breastfeed, and what barriers might prevent American mother from breastfeeding.

I burst into tears when listening to the story. It represents so much of my personal experience as an immigrant mother struggling to breastfeed against my company’s policy.

At the time I gave birth to my baby, who is one year old today, I was working as a staff writer at a Chinese-language newspaper in Los Angeles. I separated from that company when my little one was six months old after repeated incidents of harassment because of breastfeeding, ending a decade-long relationship with that company.

Before my maternity leave I looked into the employee handbook but was unable to locate any information about breastfeeding. I returned to work when my son turned three months old and needed an area to pump my breast milk. Because the company did not provide nursing employees with a place to pump, I was forced to pump in the bathroom or at my desk, covered by a jacket. When I talked to my supervisor and our HR about the lactation accommodation rights, they responded me with that they are not aware of the law.

In addition to the company’s failure to provide nursing employees an appropriate lactation space, my coworkers harassed me about breastfeeding. For instance, when I was attempting to clean my pump supplies in the kitchen, one coworker made a derisive comment that I was washing panties in the kitchen. A second coworker spread breastfeeding photos she found online and joke about them.

I was not alone. Every so often I heard my fellow Chinese-American mothers talked about quitting breastfeeding because their employer or their family (often the mother-in-law) don’t support them. It seems to be hard for non-English-speaking mothers to get breastfeeding support. I tried to invite some medical or lactation professional to my previous company and educate my previous colleagues about the benefits of breastfeeding, but I couldn’t find even one Chinese-speaking lactation professional or medical professional who was able to talk about breastfeeding. And that was in Los Angeles, one of the American cities with the biggest Chinese population.

Still, I am grateful that I now live in the United States of America, where breastfeeding mothers are better protected opposing to many other countries and regions around the world. Three months after resigning from my job, I received Unemployment Insurance Benefits from California Employment Development Department, which considered that I quit for a compulsive reason and any mother would make the same decision as I did. I doubt that I could receive the same understanding back in my home country.

Now I am working with Legal Aid Society Employment Law Center to ask my previous employer to include a clear stated lactation policy in the company manual, and to have training sessions in English and Chinese for all supervisors and employees regarding the policies.

By the way...today is my little one's first birthday! Celebrate one year of fresh breastmilk!! 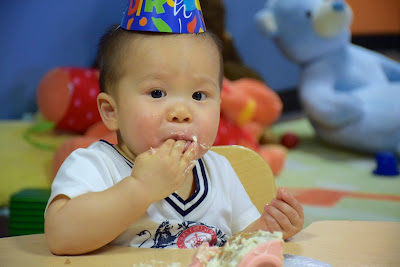