Thanks to Media Watch!

As seen on Media Watch: 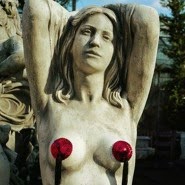 We link a related post here on this topic of breastfeeding moms here.
Below is her letter to the Asian American Journalists Association:


Spending my entire career life with ethnic media, I often feel that among those news organizations that misrepresent Asian Americans, ethnic media are the worst. It’s ironic, but it’s true. For example, just a while ago World Journal, one of the largest Chinese-language newspaper in North America, published an article titled “Breastfeeding photos embarrass Chinese-American to death,” claiming that most Chinese American consider that breastfeeding in public is “disturbing” and “disgusting.” Articles like this not only mis represent Asian Americans, but also deliver wrong idea to the community.


She is responding to this paper and translates below:


Moms think breastfeeding is a great thing, but the photos only make others feel uncomfortable


Chinese-American “Peter” was browsing Facebook when a female colleague came to his desk to talk to him. Peter just clicked on a Facebook page; he turned around to talk to the colleague while the page was loading. Soon he noticed that his colleague was staring at his computer screen with a weird look on her face. He turned around and saw there was a breastfeeding photo on the screen. The photo showed a huge boob with blue veins on it and was so “R-rated” that Peter was left speechless. “I was embarrassed to death,” said Peter. He recognized that photo was from another female colleague who he bumped into everyday, “that’s really embarrassing,” he said, “I wish I could tell her to save her breastfeeding photos for herself.”


Not only new moms seemed to addict to showing off their breastfeeding photos, some new dads even love to show the photos of their babies being breastfed more than the moms do. A Chinese-American graduate student complained that a friend from college was showing off photos of his child being breastfed on Weibo every several days, and the child not only being breastfed at home, but also in public space like shopping malls or parks. “Is he sick or what? How can he show off his wife breastfeeding like this?” The graduate student was so disturbed that he finally blocked the friend.
Posted by To-wen Tseng at 5:30 PM